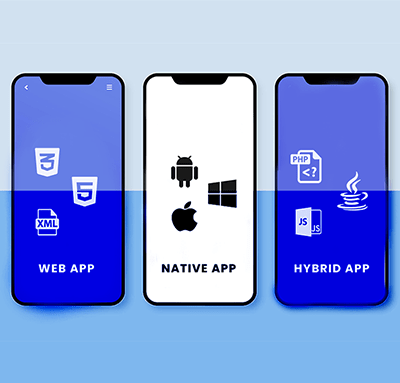 Your mobile app development project can be categorized into three main types: web, native, and hybrid. Which development path is right for your project? All three paths have intrinsic value, but which one is most appropriate?

The type of development that businesses should choose depends on the business objectives and product or service goals they need to achieve. This decision can have a major impact on the success of your mobile strategy, depending on your business objectives and overall product goals. When building your mobile app, you will need to consider several factors including whether it will be a native, web, or hybrid app.

Let us have a look.

1. Overview of Each Type of Application

What is Web App Development?

Website development and web app development are easily confused. Web apps usually offer a great deal of information, but websites provide more detail. Therefore, a web is a more compact version of a website, and a web app is known to have enhanced functionalities over a website.

Several browsers such as Chrome, Safari, or Firefox can render the web app. The biggest advantage of a web app is that it does not need to be downloaded from the app store like you would with a mobile app. A web also does not require physical storage on a mobile device since it is rendered on a browser.

The development of web apps is a good option if you wish to cater to a wide range of audiences with mobile-friendly content. The advantage of introducing your product to numerous users through web apps is that they are cost-effective. If the network connectivity is poor, small images may take longer to load if development of this kind.

The following are the advantages of web apps:

Here are a few disadvantages of web apps:

What is Native App Development?

Furthermore, specific operating systems use an Integrated Development Environment (IDE) to develop native applications. Some platforms, such as Apple and Google, provide their developer tools, interface elements, and SDKs.

Therefore, many companies choose to develop native mobile apps because of their many benefits.

What is Hybrid App Development?

Hybrid app development can work on different platforms and still behaves like a native app. Hybrid apps combine features of a native app and a web application.

Even though hybrid applications are installed on devices like native apps, technically they are web applications. Using HTML, CSS, and JavaScript, developers build hybrid apps that are executed in a WebView.

A hybrid app is a web app that provides access to additional native app functionality. Using a wrapper to act as a bridge between platforms will allow for the inclusion of native features.

Native apps provide higher performance because they can access device elements and functionality easily. Additionally, these apps utilize a wide range of advanced features (such as USB input, networking, memory management, and more) that enable them to offer a truly unparalleled user experience.

A hybrid app, on the other hand, downloads data from a server and utilizes some device features but has limited access to data. That is where native apps perform better in comparison to web apps.

As a result, web apps perform differently than native apps because they are affected by the performance of the web connection and the browser.

The projection states that there will be 258,2 billion mobile app downloads worldwide by 2022, so it is clear the wider app reach will contribute to an increase in app downloads. Web apps are directly accessible on the web while native and hybrid apps are hosted in an app store.

Native apps designed for a particular platform are hosted in the respective stores of the operating systems, both for Android and iOS. The app store can rank native apps based on the functionality and features of the device.

As hybrid apps can run on more than one platform, they are often hosted on multiple app stores, thus allowing them to take advantage of available features and rank within the relevant.

Websites are accessed through browsers. These apps do not appear in app stores, but they are available directly online.

The user experience (UX) and the user interface (UI) of a mobile app are responsible for 70 percent of its retention rate. A top mobile app development company can ensure 100% retention rates by designing an app with the latest UI trends, and with minimal bugs or UX flaws. You should ensure that the user experience of the app relates directly to the target market. By using the right technology, you can make the app a perfect fit for the audience’s preferences, choices, and interests.

Apps for Android are free to download, while apps for iOS are cost-prohibitive, so decide what type of users you want to attract. However, native apps must regularly be updated to provide a good user experience.

Apps that can run on multiple platforms and have a minimum update requirement are hybrid apps, which are best for reaching the biggest audience. Secondly, native and hybrid apps are best suited if your users will download and access the app offline.

As they are accessible from any browser and platform, web apps allow you to target a wide audience. Moreover, web apps typically require fewer updates than native applications, making maintenance easier.

It is essential to know your budget before you develop any application since development costs are one of the most painful concerns for businesses. The cost of creating native mobile apps is comparatively higher than hybrid apps and web apps since you need to hire different mobile app development teams with different skills.

The average development cost for native applications depends on the number of hours the developers spend on the project. The estimate will vary based on the app’s UX/UI design, size, and the complexity of its features.

Software development companies can create hybrid apps that can run on multiple platforms by leveraging an existing codebase.

The development cost of web apps is more expensive than hybrid apps because web apps have more complex interfaces and functionality.

I hope you have clearly understood the distinction between these three types of applications. In conclusion to this article, it is worth mentioning that each type of app has its advantages and disadvantages. As with the targets and preferences of your audience, the app development will vary significantly based on your budget.

The final success of an application is determined by the ability of the software development team to customize your application to meet the needs of the end-users regardless of the type of app you develop. It is always a good idea to consult an app development company if you have any doubts about any app.